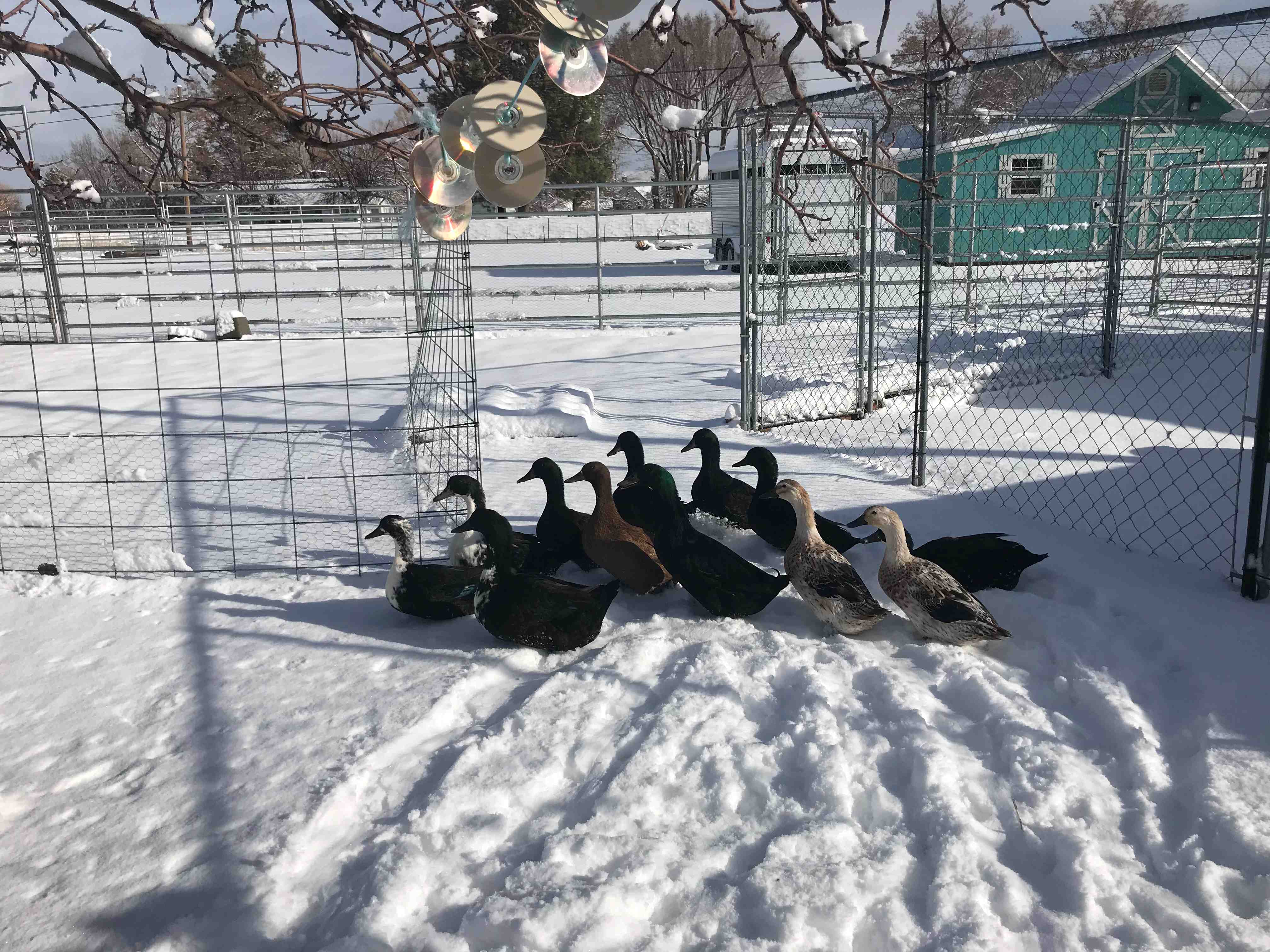 Posted by R'Chel on 2/19/2018 to Around the Farm
Hey there! Yesterday Eastern Oregon woke up to snow. Though we had snow earlier in the winter, this is the most accumulation in nearly 2 months. I for one had considered winter over. Joke's on me! Some of the animals shared it with me though....the blue & green egg layers had just started laying again - so they thought it was nearly spring too. And, the ducks started laying sporadically last week, enough to get about a dozen eggs.
I though to give you a peek at our snow day and tell you a little about our winterization. Cole took some great photos this morning as he made feeding rounds.
To accommodate the animals in the winter, we run electric tank heaters in rubber tubs for the chickens, ducks, and turkeys. The goats have 100 gallon galvanized metal tubs with bigger tank heaters in them. We've never had a problem with frozen troughs (unless the heater dies completely).
XLMS
We get an accumulation of little dark tweetie birds when it snows or gets cold. The little birds don't forage well for themselves when the ground is covered and they can't get to seeds. So, they wait to dive in and eat all our birds' food. We started scattering 1/2 the days rations for each pen in a small area, rather than free-feeding with the tube method we implement during the summer. This keeps our feed bill reasonable, at least more so than when we're feeding 30# of flock raiser granules to birds that are giving us no eggs
SMXL
.
XLLS
The goats are quite happy with their accommodations this year.   This past winter was horrid, and if the goaties had been a little taller they would have been walking over the 6' fences. As it was, Cole and I were walking over the drifted 4' fences that surround the duck yard. This winter the goats have their nice new cozy barn.
SLXL
We thought Katie was pregnant through the summer. Come to find out she was just fat. The above photo is her pregnant....and now we know the difference. We don't think Tempe conceived. Compared to Kate she looks downright emaciated!
Speaking of ducks, they're hilarious in the snow! It's water, so they'll flap their wings and do the water shuffle in it, but they can't swim. That seems to confuse them.
S
It looks pretty sunny in most of these photos, but shortly thereafter it clouded over and snowed all day. All in all, everyone fares pretty well on snow days.
Previous Post
Next Post